Carnival is Haiti is none of that…but more.

In Haiti, Carnival is more grit than glitz, more grunge than glamour, more paper-mache than glitter. The town of Jacmel on the southern coast is an artistic hub, particularly known for its paper-mache masks and creations found in its galleries and shops and on full display in the Carnival parade.

The biggest carnival parade in Haiti is in the capital Port au Prince. However, the parade in Jacmel  has become so popular that they have rescheduled it to be a week earlier then Port au Prince so people can attend both.

Haitians love a good party so there is 2-3 weeks of “pre-carnival” that includes parades with pulsating rara bands, dancing, and the ever flowing Barbancourt rum to warm up the streets for the frenetic day of the Carnival parade itself. 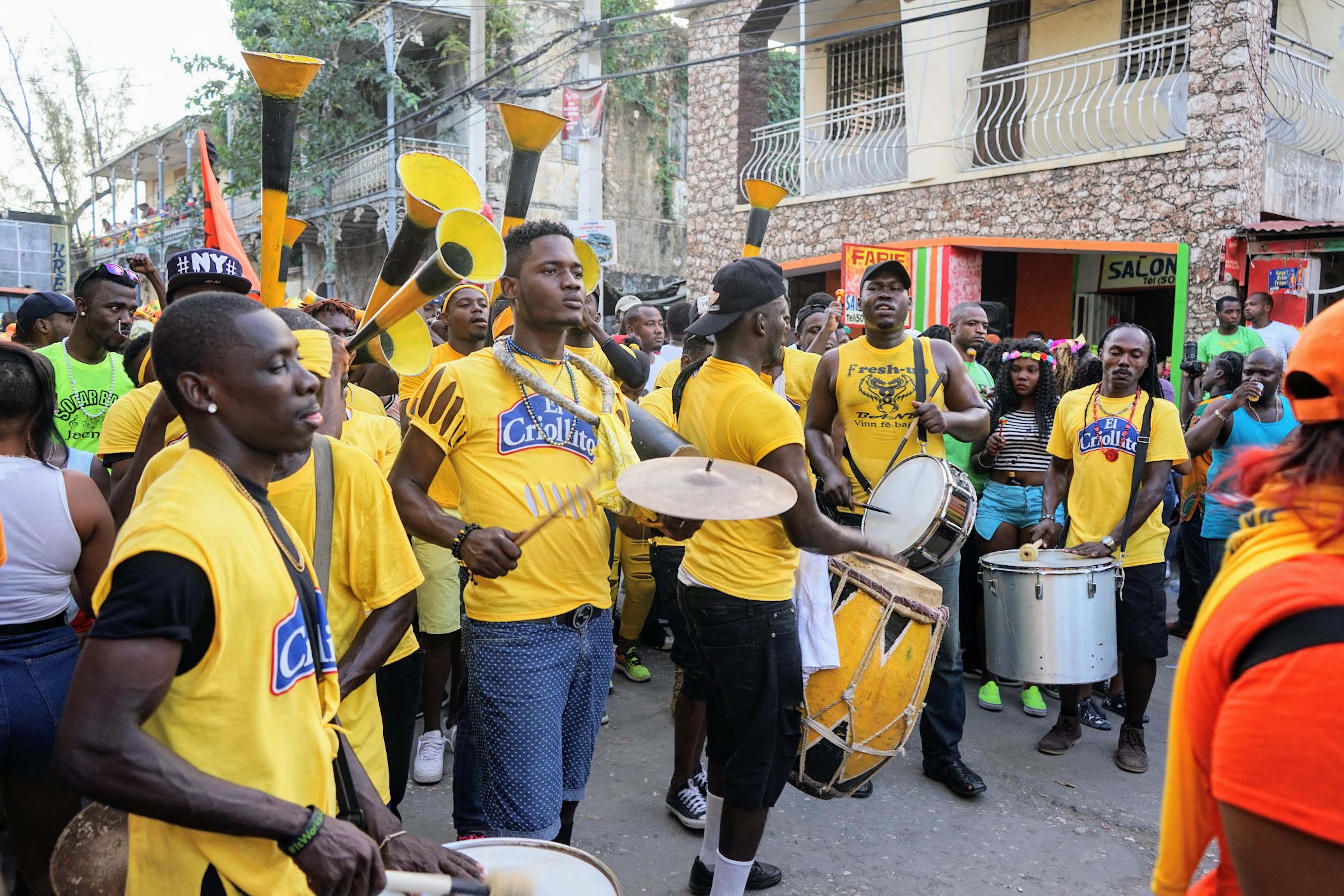 On Parade day, the costumes range from kid friendly and cute…

…to downright scary and a little creepy.

Plenty of social and political comment, some obscure, some obvious. The Cholaskas, with their buck teeth mock the sadistic army officer Charles Oscar, who terrorized Jacmel in the early 1900’s.

Sweet Micky, the “president” of konpa and recent President Michel Martelly’s foul mouthed, anti-establishment, gyrating alter ego was banned from this years carnival in Jacmel for what some consider his un-presidential like behavior since leaving office.

And speaking of un-presidential Presidents with foul mouths…

Many of the costumes are uniquely Haitian. The Lanset Kod are men slathered in a greasy mixture of charcoal and cane syrup who run through the crowds threatening to rub their oily muck on you. The Mathurin bat-devils have large wings made of wood and when they crack together in unison they sound like thunder.

There is months of work and design in many of the intricate costumes. Unlike most carnival parades, many of the faces are hidden under the costumes. As the heat built up during the day sometimes the masks came off, at least momentarily for air, water (rum) to cool down, and for me that is when the soul of the parade appeared.

Balcony – The best way to see the parade is to get above it all on a balcony. Often a local tour company can arrange a deal with a house on the parade route that offers cool drinks, a tasty lunch and all importantly a toilet (its a long day and public toilets are not around in Haiti). Our good friends at Voyages Lumiere organized this one for us with a local family they have been working with for years.

Photos – If you have a good long zoom lens you can hang back a bit on a balcony and still get some good close in shots.

Or get close in in amongst the crowd to take photos. The parade moves at a slow pace, often backed up a bit so you have the chance to walk in amongst the parade to take photos. If a face is not hidden, ask for permission to take a photo. If a face is hidden in the costume it seems to be ok and expected (and likely hoped) that you will take a photo.

Safety – Be aware of your possessions – no need to take any valuables, keep them in the hotel safe for the day. Take just a little cash for lunch, a few drinks and a cheap souvenir (mine was a straw hat with Haiti written on it), keep money and cameras close to minimize the temptation for pickpockets.

Finally – Carnival in Haiti is a unique wonderful experience. The intricate details of the masks and costumes mix with a spontaneous rawness and punk energy that is irresistible. Political satire, melancholy messages, religious symbolism, historical figures, cute, scary and impossible to define costumes, it is all there. Get to the carnival parade any way you can.

Best of Haiti with Carnival